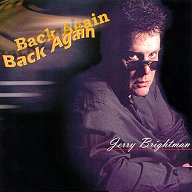 Jerry Brightman is a man on a mission: to show the world the musical potential of the pedal steel. On this CD he succeeds beyond anyone's expectations. The mix of rock, blues, ballads, smooth jazz and country is astounding. Recorded in Jerry's home studio, all of the tracks are played by Jerry himself. Many of the instruments (piano, horns, strings, etc.) are actually Jerry's pedal steel driving a MIDI synthesizer.

Jerry is also a world-class picker, as the country tunes demonstrate. He shows off his breakneck speed pickin' on "Wanna Hear It Again", and demonstrates a variety of classic country styles in the "Buck Owens Medley". But for me, the best parts of the album are the tracks where Jerry steps into unfamiliar steel territory: the contemporary smooth jazz feeling of "Breath Deep", the rock of "Metal to the Pedal", and the down and dirty "Blues Too". Jerry demonstrates that the pedal steel isn't just for country music anymore. 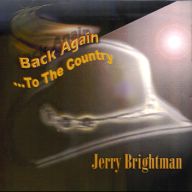 "Back Again... to the Country"

After his first solo project, “Back Again”, released late last year, Jerry decided to show us that he could also play the more traditional songs as well. Combining some old standards, along with some songs written by Jerry, he released the 2nd solo project titled, “Back Again, To The Country”. Jerry establishes one of his trademarks right up front, with warp speed picking on “Bar Bounce”. It's sort of a Ricky Skaggs type cut, with multiple instruments stepping forward to take the various lead solos.

The CD continues on with other traditional cuts and with his beautiful ballad versions of “Watermark” ,"Margit Waltz", written for Jerry's guitar endorsement company owners wife, and “Born To Loose”. His interesting twist on the George Jones song, “The Race is On”, is also very unique and different. Jerry drops down on the C6th neck with “Blues Walk” an up-tempo swing tune. Completing the CD is a rendition which Jerry once again steps outside of the traditional placement of the instrument, with a blend of midi strings and steel on “Shenandoah”. This cut sounds more like a movie score.

Jerry shows his musicianship throughout the CD by performing on all of the instruments. This is a must have for any steel guitar enthusiast and we can’t wait for the next release.

-Robert Crocker
reprinted by permission of the author