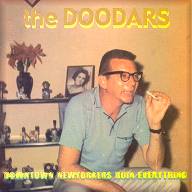 Forumite Bob Hoffnar holds down the steel chair in this New York studio punk art quartet. Bandleader Justin Asher composed most of the tunes, which are a bit reminiscent of Frank Zappa. Bob's pedal steel is very much "on the edge" both in tone and in the choice of notes.

It's worth noting that all parts (guitar, steel, double bass, drums and percussion) were written by Asher. Bob recorded his parts with only drums as a reference. Bob plays well, of course, but the genre is far from the mainstream styles we expect to hear on a steel guitar. If you're looking for country, move on. Those downtown Newyorkers ruin everything!